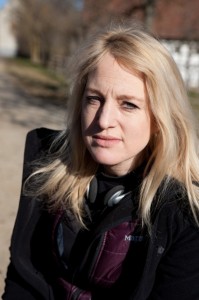 In an age when nationalism keeps threatening to raise its head again, Maria von Heland has just the kind of cosmopolitan background the European film industry needs. Born in Stockholm in 1965 into a family with a Swedish and Austrian/Jewish background, she has studied Photography in Sweden, Acting in France, Journalism in New Jersey and Film at Potsdam-Babelsberg; has an MFA from the California Institute of the Arts (where she studied under the great British director Alexander Mackendrick); has lived in Berlin since the early 1990s; and has made films in Germany, Sweden and Mongolia. She speaks Swedish, German, French and English, the last very fast and with a disarmingly British accent.

von Heland first attracted attention with an 11-minute short called “Chainsmoker“, which starred Amanda Ooms as a young woman whose desperate night-time search for a packet of cigarettes triggers a series of ever more bizarre events, culminating with a superb comic pay-off. That was followed by another short, “Real Men Eat Meat“, set in Ulan Bator and about a Swedish boy and a Mongolian girl who are forced by their parents to spend the afternoon together. It is a film of great delicacy in which sulky reluctance turns into friendship and almost blossoms into love.

von Heland’s first feature, “Big Girls Don’t Cry“, revealed her to be an extremely sensitive director of actors (and actresses). The story of the relationship between two school friends which becomes strained when one of them decides to take revenge on her father’s infidelity, the film premiered at the San Sebastian Film Festival.

von Heland’s skill with actresses was also to the fore in her second feature, the Swedish drama Search, starring Ooms as a young woman navigating the dangerous waters of internet dating, which had its international premiere in Montreal in 2006. Since then, von Heland has written and directed a Swedish two-part miniseries entitled “Those Who Whisper”, an unflinching look at the effects of pedophilia in an apparently peaceful Swedish suburb (“Those who live in silence condone. Those who whisper, lie. Those who scream are not heard”). In 2007 she directed an adaptation of Richard Curtis’ “The Girl in the Café” under the title “Suddenly Gina” for German television, starring Julia Jentsch and Jan Josef Liefers, and she wrote the screenplay for the big-budget biopic “Hilde“, starring Heike Makatsch as the troubled postwar German star, which premiered at Berlinale 2009.

“I don’t really do nationalities,” says Maria von Heland. “I don’t see myself as strongly one thing or another. It’s a problem, actually, because we seem to want that in Europe – that nationalistic feel to films.”

The fact that von Heland is not German-born and was only a year old at the end of the period dealt with in “Hilde” doesn’t phase her at all. “I had never even heard of Hildegard Knef, literally,” she chuckles. “But not having a history and not having hated her on television for 25 years was probably really good: it meant that I didn’t have those strong emotions about her.“

“It’s an intensely German story which starts during the war and eventually goes into the Economic Miracle,” she adds. “The film is the portrait of an artist, of somebody who finds their creative voice. But it’s also a portrait of Germany, a country that I have visited and looked at and had a relationship with for so long. Hilde becomes a very German figure: that’s what’s fascinating about her. She became the personification of postwar Germany, the epitome of the Trümmerfrau – the people who went out and literally built up the houses again from the rubble. But in her personal life she always did the wrong thing. Whenever she got to a place where something functioned, it exploded in her face.”

In von Heland’s career, it has been pretty much the opposite: each time she seems to have settled into something, it is she who has made the choice to move away. Journalism, for example, which she found “too personal”. Similarly, her time in California ended with exactly what a degree from the Disney-funded Cal Arts is supposed to bring: the opening of a career-door. In von Heland’s case, she was offered a top job at a computer games company. All she had to do was say how much she loved computer games. “But how could I say that? I hate them!”

This prompted the return to Germany and the first short film, “Chainsmoker”. “It’s very Berliny,” she says. “It took place exactly where I was living at the time and the elements in it were things I knew about.”
The same process of reaction led to the Richard Curtis adaptation, which came out of a desire to escape the dark world of “Those Who Whisper”. “I know Curtis’ story is about people dying of starvation in Africa and hunger and AIDS, but it’s actually a romantic comedy,” she says. “It was such a relief to be allowed to do some- thing other than this incredible darkness. It had become a kind of spiral in which the films kept getting darker. Having spent 2×90 minutes in the world of pedophiles, it was time to quit, to get out of the basement and see some light.”

Since “Hilde” (directed by Kai Wessel) was completed, von Heland admits she has been getting lots of offers to write historically-based scripts. “I don’t mind at all, actually,” she says. “I like writing history because I like learning. And I’d rather write about that than about women who perpetually have problems getting laid, which some of my films have been about. But I think the main thing for me is, the next film I write, I also want to direct. “I never made a conscious decision to take a break from directing films,” she explains. “But, watching Hilde being made without being able to contribute with what I do best – which is bringing out the psychological truth in human relation- ships – was a painful process. I know that no two filmmakers would make the same film from a script, and my vision goes far beyond the writing process. I don’t mind writing the odd screenplay for a colleague every now and then, but I have learned that I am a film- maker, not a writer. So from now and on, I am focusing on my film- making work.”

“What I do with a passion,” she concludes, “is write stories about people. I try to avoid making judgments, but I am passionate about understanding the world I live in, its people and their weaknesses. To me, filmmaking is like having a colorful dream; then, one day, after years of hard work, you can invite people into the cinema and say: ’Look what I just dreamed!’ It’s a beautiful experience and, once you’ve had it, it is very hard to do anything else with your life. It is not about becoming famous, or being the best. It is about creating something magic.”

In 2010 von Heland directed the Children’s Film Die Sterntaler (Startalers) produced by Uschi Reich for Bavaria. The film won the Best In Fest Award at the Chicago International Filmfestival, competing against 236 films from 42 countries. von Heland won a Bavarian TV award for Best Directing and Startaler was also nominated for an Emmy 2012.

In 2013 von Heland directed the children’s film ‘The Devil with the Three Golden Hairs’, written by Rochus Hahn and produced by Uschi Reich for Bavaria/ARD/SWR. The critic praised film premiered on the Schlingel Filmfestival and was first aired on National German Television on Dec 26 and was nominated for an Emmy 2014.

Also in 2013 von Heland directed the TV Feature “Göttliche Funken”, co-written with Sathyan Ramesh and produced by Nataly Kudiabor. The film premiered in Emden Film Festival on May 10th and was nominated for a CREATIVE ENERGY AWARD. It was seen by over 3 Million on ARD, Germany’s Channel 1, on May 30th, 2014 and received with raving reviews by the critics. 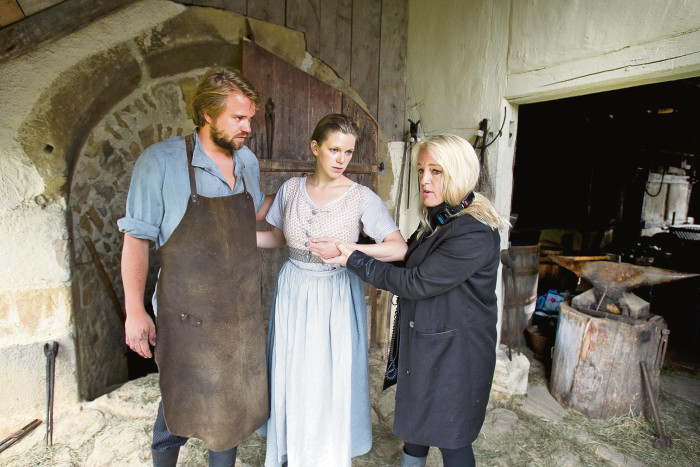 The adaptation of François Lelord’s bestseller Hector and the Search for Happiness starring Starring Simon Pegg, Rosamund Pike, Toni Collette, Stellan Skarsgård, Jean Reno, Christopher Plummer and Barry Atsma written by Maria von Heland and Peter Chelsom & Tinker Lindsay and directed by Chelsom enjoyed a major international release including the UK, Germany and the US in 2014/15.

For Sat 1 she directed the 90-mins pilot ‘Jung. Blond. Tot.‘ starring Sandra Borgmann (2018) which went into a series format. This brutal serial killer thriller drama features a powerful female lead which came to life when von Heland took on the project. 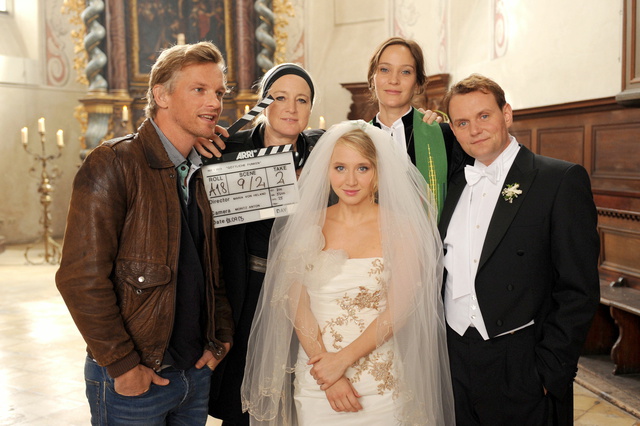 von Heland’s adaptation for the 26-part drama series of the vampire novels HEIRS OF THE NIGHT  produced by Hamster Film (Dorothe Beinemeier, Lemming Film (Leontin Petit, Fleur Winters), Phillip Kreuzer (Maze Pictures) and Maipo Film (Synnøve Hørsdal) were aired and streamed across Europe, nominated for an International Emmy, won the prestigious  German Children’s Film Awards Goldener Spatz and a the White Elephant. Maria is the show’s creator together with director Diederik Van Rooijen. Season 3 and 4 are currently being developed at Lemming Film.

In 2021 Maria directed a film in the long standing series NORD NORD MORD. Her “Sievers und der Schönste Tag” with Hannelore Hoger took the shows traditionally high ratings to a new lever, with over 10 million viewers.

Having left her long term commitment as a creative director and writer for the European Film Awards in 2018 in order to focus on writing and directing her own work, Maria embarked on an adventure in Lockdown 2020. The radical change in life everywhere on earth, the fact that history was being written in that very moment, inspired her to start working on Sunshine Eyes – a story set in lockdown. Shooting began as soon as she could get her hands on a Alexa camera, early May 2020. Cristian Pirjol, her collaborator from Schlaflos and Jung Blond Tot joined her in an adventure which would end up being the 10 episode drama now being shown in International Panorama at Series Mania on March 22 2022.

The whole selection committee was very impressed by this subtle and intimate take on the beginning of the covid-era. It felt both like facing a moving mirror of our own life when covid first hit as well as discovering more-than-real stories of fellow citizens, should their story meet ours (the third episode for instance) or should they show us peculiar situations we couldn’t really experience before (the pilot but also the second episode with the father’s hidden and growing violence). You also achieved something really strong with your cast that felt so real to us. For all those reasons and more, we’d be delighted if you could join us next March at Series Mania.

Sunshine Eyes was 100% independently produced by Tindra Films, Red Balloon Film and Maze Pictures in association with Shoot’n’Post. It is sold by Philipp Kreuzer of Maze Pictures.

Maria’s collaboration with ZDF continues and her film Kolleginnen – Für Immer is in the final stages of post production.  Maria is the creator of the international co-production with ZDF Alea Aquarius an epic YA series – adapting the best-selling novels by Tanya series – produced by Dorothe Beinemeyer of Red Balloon Film.  Maria is the writer of 24 episodes for season 1 and 2.

With C-Film in Switzerland Maria is developing a series set in the cradle of psychoanalysis “Playing Emma Jung” and with Tobis Film “Peaked” starring Heike Makatsch.